Not so long ago, the lofty peaks of the Benchichins Mountains could be seen between Angus and Deeside… or could they? At a stroke, these mountains that had been there for centuries were mercilessly obliterated in the hands of mapmakers.

In this fully illustrated talk, Map Curator Chris Fleet looks at various other things on maps that might never have been really out there, as well as how maps lie, distort the truth and miss things out. How far should we trust the map, and is this a good idea?

Christopher Fleet is Map Curator at the National Library of Scotland, where he has worked since 1994. His main focus has been on digital mapping and the NLS Map Images website. He has actively researched historic maps and digital technologies, and is the co-author of Scotland: Mapping the Nation (2011) and Edinburgh: Mapping the City (2014). 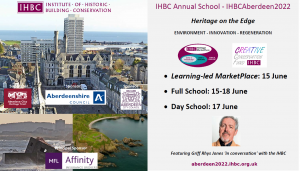 Heritage on the Edge

Challenges may include geographical issues – urban and rural locations and populated and unpopulated areas. They may be social, and reflect diverging pressures across communities and development. Or they might be cultural, where values and tastes evolve as perceptions and understanding change. We see this with new industries such as nuclear, oil and gas, as they go out of favour for environmental reasons, inevitably creating new legacies, as well as Victorian and Modernist styles that veer in and out of fashion.

The Aberdeen School offers in-person and virtual content from a representative but diverse range of conservation-related challenges for heritage on the edge, looking across Aberdeen City, Aberdeenshire, Scotland, the UK, Europe and far beyond, including, notably, South Georgia and the Sandwich Islands.

Aberdeen 2022 gives priority to continuing professional development (CPD) for practitioners with conservation, heritage and inter-disciplinary interests. As such, the programme reflects all aspects the IHBC’s Competences and Areas of Competences, for the Friday Day (and Virtual) School, themed around key current issues for practitioners: